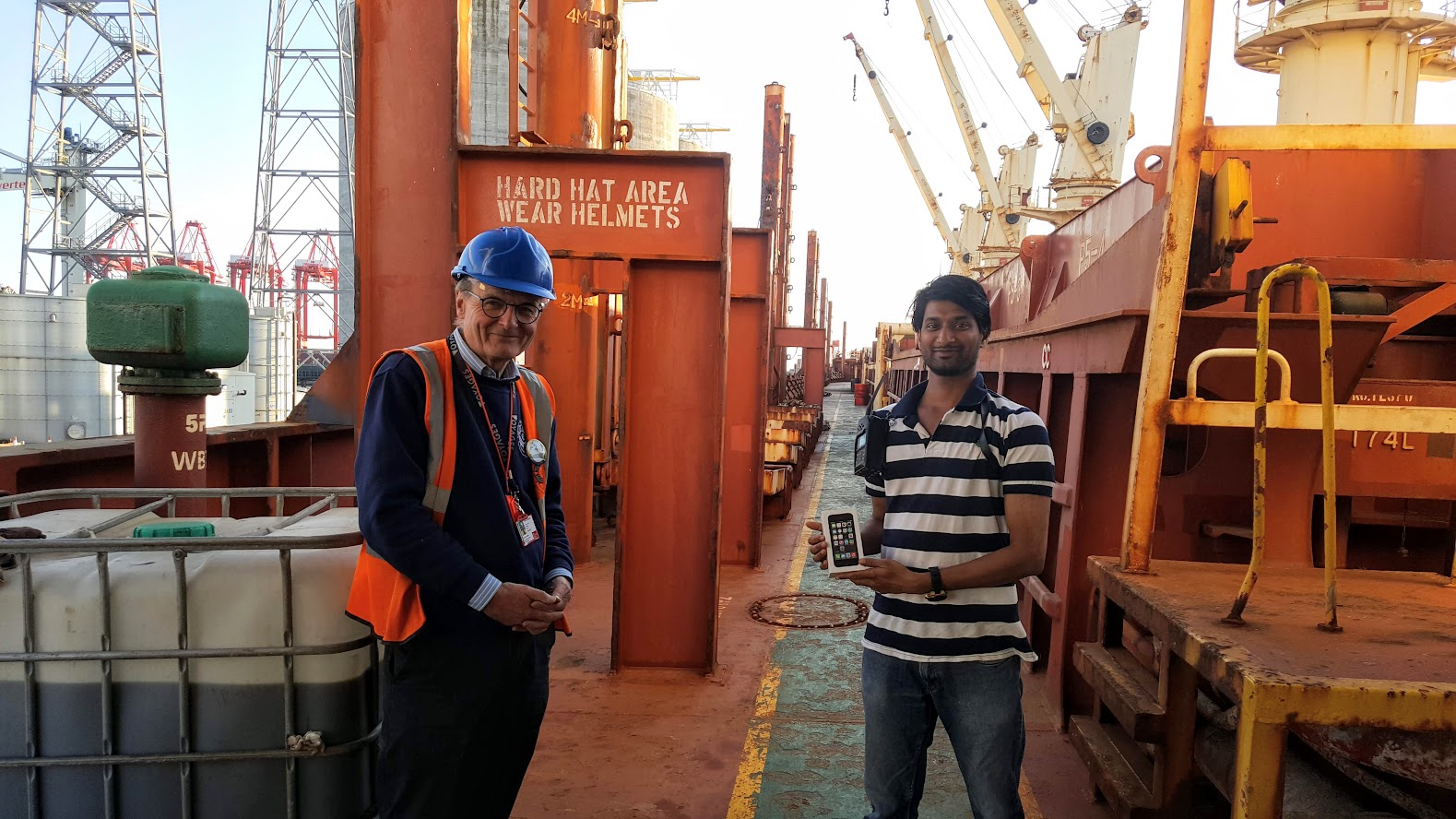 An Indian seafarer stranded thousands of miles from home because of the Covid-19 crisis has been able to reconnect with his family thanks to the help of two Liverpool-based maritime organisations.

Ecumenical charity Liverpool Seafarers Centre launched a social media appeal after hearing about 3rd Officer Nishanth Sadaram who had lost touch with his family after his mobile phone was damaged by seawater.

Mr Sadaram arrived in Liverpool aboard MV Seamec Gallant, a bulk carrier transporting grain from Argentina to the UK. Restrictions imposed due to the Covid-19 pandemic meant he was unable to leave his vessel to buy a replacement phone.

After reading about Mr Sadaram’s plight on Twitter, a member of Propeller Club Liverpool rose to the challenge and immediately got in touch to donate an Apple iPhone to the stranded seafarer.

John Wilson, Chief Executive of Liverpool Seafarers Centre, travelled to the Port of Liverpool to personally deliver the handset to a very grateful Mr Sadaram.

Mr Wilson said: “The smile on Nishanth’s face when I handed over the iPhone made it abundantly clear how much this generous gift from the Propeller Club means.

“The current crisis has left large numbers of seafarers in a worrying and precarious position, with all vessels on lockdown and no shore leave permitted. Travel and quarantine restrictions mean many are unable to return home when their contracts end, leaving them thousands of miles from home and their families.

“We all now take phone calls, email, messaging apps and social media for granted, but if seafarers lose that link with home it adds extra pressure to an already stressful situation. This gift will allow Nishanth to keep that vital connection. It’s another shining example of the generosity of this city’s residents, and of the respect Liverpool has for the critical work done by seafarers everywhere.”

Mr Sadaram added: “Thank you so much for the iPhone. It has saved my life by helping me communicate with my mother, brother, cousins and friends back home during Covid-19 times.”

Adam Whittle, Propeller Club Liverpool President, said: “The Propeller Club is at the heart of a proud maritime community in Liverpool, and as such we are so pleased that we were able to assist. In these dark times we are all more reliant on seafarers than ever before, and so being able to extend the hand of welcome, generosity and support is vital.

“Many of our members are both serving and former seafarers, and so know first hand how hard it can be for crew today. We very much hope the phone allows the particular seafarer to stay in touch and feel closer to their family and loved ones at home, and we are very pleased to be supporting the seafarers centre here in Liverpool.”

Liverpool Seafarers Centre has been overwhelmed by the public’s response to its recent appeals. Donations made through the charity’s website and by post are being used to provide other visiting seafarers with mobile handsets and internet-enabled SIMs, allowing them to speak to friends and family at home.

The organisation is also looking to purchase MiFi devices, which create an internet hotspot and allow up to 20 people to go online simultaneously. Each device costs £450 and Liverpool Seafarers Centre is aiming to buy 10 of the units to loan to vessels whilst in port.