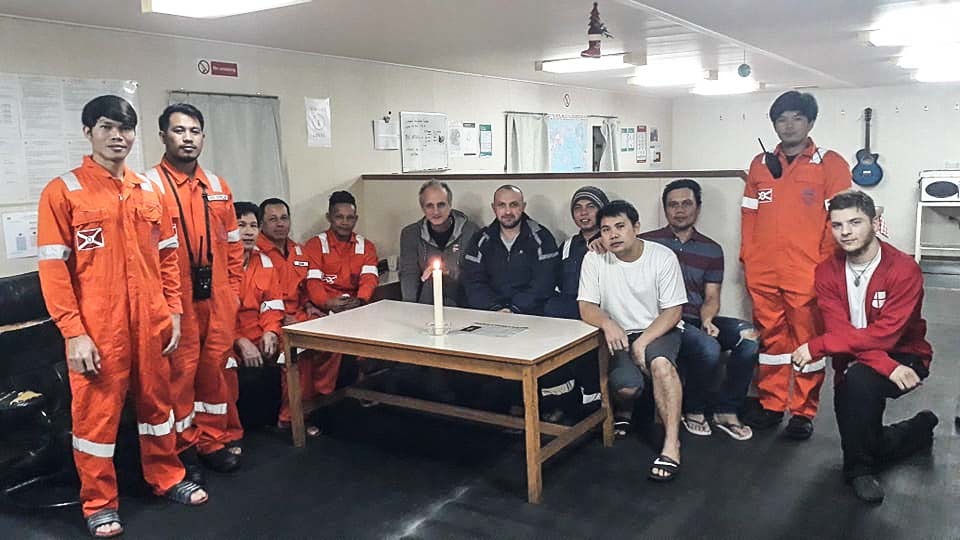 Liverpool Seafarers Centre says it will increase its ship visits to vessel-bound seafarers after temporarily closing its centres in Crosby and Eastham to crew and visitors following Government advice on March 20 2020.

LSC CEO John Wilson said the move follows the Prime Minister Boris Johnson’s advice that cafes, pubs and restaurants must close from Friday night, except for take-away food, to tackle coronavirus. All the UK’s nightclubs, theatres, cinemas, gyms and leisure centres have also been told to close “as soon as they reasonably can”. Mr Johnson said the situation will be reviewed each month.

Mr Wilson said LSC’s team of outreach workers will seek to increase their critical ship visits to provide a lifeline to seafarers who now cannot leave their ships. And over the weekend of March 21 Mr Wilson presented the crew of MV Beteugue with a ‘light of the world’ prayer candle during their visit to Liverpool deliver grain.

“LSC’s work is now more important than ever for seafarers,” he said. “We will be providing practical support, such as undertaking shopping, on our ship visits and also offering important pastoral care monitoring their mental health and helping them with personal matters. Seafarers are critical to our country’s ability to survive the crisis and must not be forgotten. We rely on them for 95pc of everything we import and export including our food and medicines. Seafarers are in very uncertain times and many are unclear how and when they will be able to return home. In the meantime, they must keep working far from family and loved ones.”

Mr Wilson appealed to donate toiletries, confectionary, puzzles and games, warm clothing, fresh fruit, cds and recently released DVDs. He said donated goods can be left in the porch of LSC’s Crosby headquarters and the LSC team will then take them to ships direct.

“Though their colleague seafarers are standing by on shore in their home country, the relief process is stalled as many port states have imposed local regulations, travel and quarantine restrictions due to COVID-19, despite the IMO circulars to be mindful of free access to seafarers. In many cases neither the seafarers nor the companies know for how long these may prevail,” Intercargo stated.

“Without efficient crew changes, the supply chain would break down leading to basic product shortages and greater hardships for people around the world. It is paramount to consider the mental state of seafarers, who look forward to re-uniting with their families after serving 4-9 months on board a ship, as well as the adverse repercussions on the safe navigation and operation of ships,” Intercargo stated. “Banning crew changes in ports brings high risks to crews, ships, ports and society.”

Liverpool Seafarers Centre, which won the Positive Impact Award at the Mersey Maritime Industry Awards 2020 this month helps 50,000 seafarers each year visiting Merseyside ports. It is a partnership between Apostleship of the Sea (Liverpool) and The Mersey Mission to Seafarers. In September 2019, LSC was awarded the world’s best seafarer centre at the International Seafarer Welfare Awards (ISWAN) as nominated and voted for by mariners themselves. The charity’s work involves visiting vessels to integrate with the crew, offering a listening ear to help combat isolation and loneliness and providing places ashore for seafarers to relax away from their working environment.