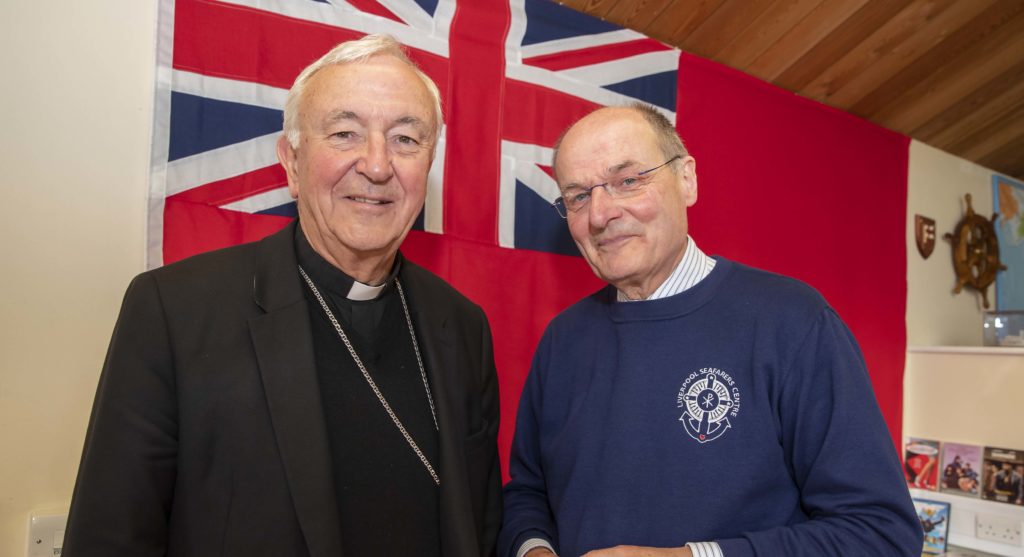 The Archbishop of Westminster has paid a special visit to ecumenical charity Liverpool Seafarers Centre encouraging local communities to support the plight of seafarers ahead of Sea Sunday.

Cardinal Vincent Nichols visited the charity headquarters in Crosby on Saturday (JUNE 15) to learn about the widescale support it delivers to 50,000 seafarers passing through the Port of Liverpool each year.

Cardinal Nichols, who grew up in Crosby, said the global Sea Sunday celebration on July 14 presented a terrific opportunity to recognise the role of seafarers.

The annual event sees Christian churches of all denominations remembering and praying for seafarers, giving thanks to their lives and work.

Charities including the national Apostleship of the Sea, The Mission to Seafarers and the Sailors’ Society as well as non-denominational groups such as Sea Cadets carry out fundraisers, hold parades, and run awareness campaigns about life at sea.

Cardinal Nichols said: “This is a timely visit to Liverpool Seafarers Centre ahead Sea Sunday. It is wonderful to know that the centre is there to respond to the needs of seafarers, with practical and spiritual support, and I really do want to thank them. Seafarers have long been synonymous with the city of Liverpool being part of the fabric and identity of the city. But more importantly, they play a fundamental role in each of our lives, with 95pc of British imports and exports transported by sea.

“When I visited Tilbury Docks a few years ago where I saw first-hand the confined quarters in which seafarers live. all the dangerous edges they negotiate, with huge amounts of heavy equipment and other machinery. I was surprised to learn about the speed with which ships turn around and the limited opportunities crew members have to get off the ships and to do the things you can’t do on ships, such as go to church, shop, get medical attention and contact their families.

“There are many ways local communities can support the work of organisations like Liverpool Seafarers Centre. We are encouraging all parishes to reach out ahead of Sea Sunday and help raise greater awareness of the important contribution that seafarers make to all of our lives.”

The relevance of the issue, which is prevalent in the maritime and seafaring sector, most notably the fishing sector, was highlighted during a homily delivered by Cardinal Nichols at the Metropolitan Cathedral in Buenos Aires. The Cardinal emphasised that due to the pursuit of cheaper goods, illegal or immoral pleasure, cheap services for our bodies or for our cars, we are part of the demand met by modern day slaves, and part of the process by which this slavery is one of the most profitable criminal activities in the world.

Liverpool Seafarers Centre CEO John Wilson said: “It’s been a privilege to open our doors to Cardinal Nichols. While having a global profile in the Catholic community he is also very well known locally having spent almost 15 years in the Liverpool archdiocese including vocations in Wigan and Edge Hill.

It’s been particularly important for us to receive his blessing ahead of Sea Sunday as we gear up celebrate seafarers and fundraise with thousands of Christians around the world. The Cardinal’s prominent role in promoting inter-faith relations with his message of love, respect and acceptance strongly resonates with that of Liverpool Seafarers Centre, as an ecumenical charity.

“Cardinal Nichols has consistently defended the freedoms of other faiths in order to build bridges. He has done this with other Christian denominations, as well as Sikhs and Hindus. He has also spoken strongly about the importance of Christian dialogue with both Jews and Muslims as part of the Catholic Church’s agenda.

“We were thrilled he was able to pay tribute to the work of all those involved with our charity while acknowledging the professionalism, dedication and sacrifice of our visiting seafarers. He said the church will continue supporting their faith and welfare needs through its maritime mission agency, the Apostleship of the Sea.”

Liverpool Seafarers Centre is a partnership between the Catholic Apostleship of the Sea (Liverpool) and the Anglican Mersey Mission to Seafarers. Its history dates back to the 19th century. The charity provides ‘a lifeline’ to seafarers both active and retired. It offers a safe and secure place to rest and receive practical and emotional support through its bases in Liverpool Cruise Terminal, Crosby and Eastham. It garners the support of many cross denominational faiths and organisations.

On a practical level, it provides access to WIFI, money exchange and a physical base on land for crew to take relief from the vessel. It offers emotional support for ‘major life events’ such as births, marriages, deaths, bereavements and divorce. The centre also acts as a mediator communicating with ship management companies to ensure seafarers are being properly cared for.