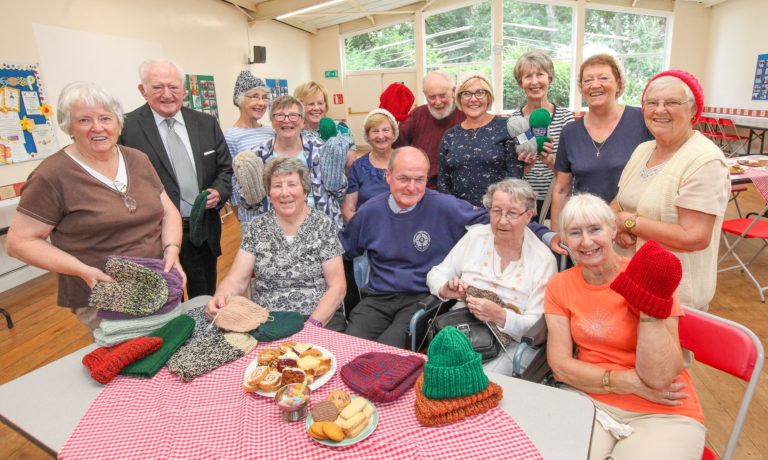 An industrious group of Wirral knitters are celebrating a special milestone after making more than 5000 hats for seafarers entering the Port of Liverpool.

It has taken the group of 25 women from St Joseph’s Parish Church, in Upton, more than seven years to reach the figure in partnership with Liverpool Seafarers Centre.

Jackie Scanlon, who leads the initiative said the hats have ensured a warm welcome to thousands of Liverpool-bound seafarers over the years.

“We are all absolutely thrilled to have reached this milestone,” she said. “We started off from very humble beginnings in 2011 when we were asked to knit a few hats. It really took off and while not everyone in the parish knits, many people got involved by donating wool and material.

“When the seafarers arrive in Liverpool, they are often looking for some form of comfort and respite, and with the cold wet conditions they endure we have found that new, warm woolly hats go down a treat. We never thought we would end up producing this volume of hats, but the demand just keeps coming, and we take great pride in offering the service.”

Mrs Scanlon has a strong connection with the British Armed Forces, as a former RAF Cosford and RAF Lyneham recruit. Her son Andrew is a former Royal Navy officer, while her father John, aged 91, is a Merchant Navy veteran with long-term involvement with Liverpool Seafarers Centre.

“In Merseyside we have such a strong emotional connection with the sea,” said Jackie. “There are so many families who have a link with the shipyard, the Royal Navy, or seafaring. My family is no exception. My father John has always instilled in us the importance of serving in the community and he still joins us now to hand the hats out to seafarers, because it’s so close to his heart.

“We’re hugely grateful to all the members of our parish who have supported the initiative over the years, whether it be knitting or supplying wool. Members from another community group called Rhythm and Line who use the parish hall have also greatly contributed. Without each and every persons’ efforts we would never have been so successful.”

Liverpool Seafarers Centre (LSC) offers wide-ranging support to 50,000 seafarers who pass through the River Mersey Ports and berths every year. The charity is an ecumenical partnership between the Apostleship of the Sea (Liverpool) and The Mersey Mission to Seafarers.

LSC CEO John Wilson said the centre welcomes seafarers from all over the world and is now preparing to extend across North West ports including Silloth, Workington, Barrow and Glasson.

“LSC is immensely grateful to the members of St Joseph’s Parish Church and associated groups, all of whom have contributed to reaching this impressive milestone,” he said. “We are incredibly fortunate to have such strong support from people across our region who recognise the importance of seafarer welfare. However, we are keen to reach out to more local community groups, fellowships, businesses and volunteers who may not have heard of Liverpool Seafarers Centre and can help support our vital work.

“There are many ways in which we can form meaningful partnerships to benefit the tens of thousands of seafarers who visit our port city each year. We are appealing to groups and individuals to make contact so that we can visit and explain more about our work and how we might develop partnerships for mutual benefit.

“It is all too easy to forget the colossal effort these seafarers go to, day in, day out, to deliver around 95pc of all the goods we consume. Without them the country would come to a grinding halt. It is our mission at Liverpool Seafarers Centre to ensure we meet the spiritual and emotional needs of all seafarers entering our region, alongside physical and more practical requirements.”

Sea Sunday is the day which many Christian Churches set aside to remember and pray for seafarers and their families and give thanks for their lives and work. It is officially held on the second Sunday in July. During Sea Sunday, charities such as the Apostleship of the Sea, The Mission to Seafarers and the Sailors’ Society as well as non-denominational groups such as Sea Cadets conduct fundraisers, hold parades, and run awareness campaigns about life at sea.

Sea Sunday is recognised by many churches around the world who hold celebrations, services and collections to support the work of seafarers. In the Catholic Church, Sea Sunday is supported by the Apostleship of the Sea. A second collection is held during Catholic Sea Sunday Mass, with all funds raised going to the Apostleship of the Sea to support its work. It is a day of remembrance, prayer and celebration, and an opportunity to think about and thank those seafarers who work tirelessly throughout the year bringing us the 95% of good and services we often take for granted.