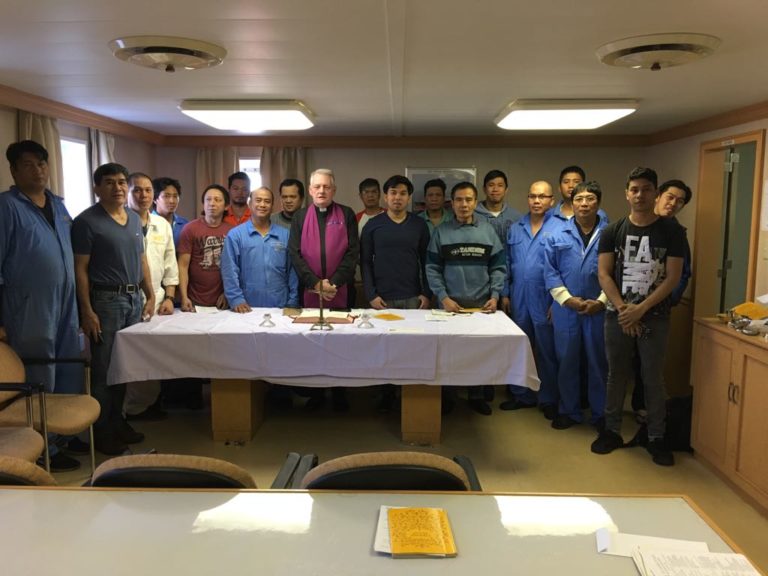 A Liverpool maritime charity is stepping up efforts to deliver church services on board vessels after reporting a rise in demand for spiritual support from crew members.

The Liverpool Seafarers Centre (LSC) offers wide-ranging support to 50,000 seafarers who pass through the River Mersey Ports and berths every year, including church services, sacrament and blessings directly on-board vessels.

The news comes shortly ahead of Sea Sunday – an annual celebration held on the second Sunday in July – when Christian churches of all denominations remember and pray for seafarers, giving thanks for their lives and work.

During Sea Sunday, charities such as the national Apostleship of the Sea, The Mission to Seafarers and the Sailors’ Society as well as non-denominational groups such as Sea Cadets carry out fundraisers, hold parades, and run awareness campaigns about life at sea.

LSC is an ecumenical partnership between the Apostleship of the Sea (Liverpool) and The Mersey Mission to Seafarers, both body’s being independent of the national and international Missions.

LSC CEO John Wilson said Britain has a heavy dependency on the invisible army of brave seafarers with 95pc of everything we consume transported by sea. And with the cruise season well underway, Liverpool is also expected to welcome 58 ships each carrying between 120 and 1350 crew from now until September.

However, many seafarers on board cruise vessels are only permitted up to two hours shore leave making it difficult to attend church services. Crew on merchant vessels too are precluded from attending church services, even when in port due to operations on board.

“We are one of the few port cities to have a seafarer welfare centre located in the actual cruise terminal,” said Mr Wilson. “So, we are able to interact directly with seafarers as soon as they leave the vessel. Merchant vessel crew have often been at sea for many days often weeks, working extended hours. Many of these crew are people of faith, often desperately in search of spiritual nourishment, and we are witnessing an increase in requests for church services to be delivered on board. This affords seafarers the opportunity to practice their faith in a way many of us take for granted.

“Most often crew are seeking to attend mass, receive the holy sacrament, a blessing or even counsel from a priest. Life goes on while these people are at sea including major life events such as births, deaths, marriages, divorce and bereavement. It may be that they have suffered a rough passage with storms or adverse conditions, or an incident onboard, or are even travelling on a new ship and request that the vessel be blessed. Whatever it may be, we have the ability to bring ‘church’ to them. In the first few weeks of 2018, we have delivered six services. This is an increase on the same period last year, when we delivered a total of 12 services throughout the year.

“We welcome seafarers from all over the world including countries like Bangladesh, Indonesia, India and the Philippines. We can provide them with spiritual support aligned to whichever Christian denomination they follow – Catholic, Protestant, Methodist. The important point is that we are here to support their spiritual and emotional needs in equal measure to their physical and more practical requirements.”

Liverpool Seafarers Centre’s roots date back to the 19th century and is funded by donations from parishes as well as general donations. It recently introduced a new port levy inviting shipping lines to contribute directly to service provision which is now extending across North West ports including Silloth, Workington, Barrow and Glasson.

Father Martin Caddell, parish priest at St Joseph’s Roman Catholic Church in Blundellsands, Liverpool, and honorary chaplain to Liverpool Seafarers Centre, has delivered many of the recent services on board.

“Our presence on board vessel is always carried out with the upmost respect to all crew members, including those of other faiths,” he said. “We always seek permission from the captain to perform a service following a request from crew. The actual service usually takes place in the mess area. It is a more fluid and flexible approach to that of a church service, with crew members able to come and go, so as they can fulfil their other responsibilities on board. When we bless a vessel this usually takes place on the bridge and involves sprinkling with holy water.

“Because of our history as a seafaring city we understand the challenges faced by the thousands of seafarers passing through our port every year,” he said. “We have a strong emotional connection with the sea here on Merseyside and we have a reputation as a friendly, caring port city. It is with great pride that we are able to report a rise in the outreach work we are delivering for the maritime sector in time with Sea Sunday, and we are now gearing up for a busy period throughout the cruise season.”

The Right Reverend Paul Bayes, Anglican Bishop of Liverpool, said: “As the Anglican Bishop of Liverpool I understand the importance of seafarers to the life of this city and nation. I warmly welcome the work of the Seafarers Mission and support their initiative in bringing faith and welcome to those whose work takes them far from home.  Having a strong Christian presence reminding them of the bigger difference that having God in their lives brings is of tremendous importance. I encourage all in our diocese and across the Anglican communion to remember, pray for and support this vital ministry on Sea Sunday.”

Most Reverend Malcolm McMahon OP, Catholic Archbishop of Liverpool, said: “Sea Sunday gives us the perfect opportunity to recognise and give thanks for the invaluable work of the Liverpool Seafarers Centre in providing spiritual, emotional and practical support to seafarers from across the world throughout the year. They provide for the needs of those who are far from home and loved ones for long periods of time and are often in port for only a few hours. The ability to respond to those needs immediately is vital and the work of the Centre merits both our prayerful and practical support.”

Sea Sunday is the day which many Christian Churches set aside to remember and pray for seafarers and their families and give thanks for their lives and work. It is officially held on the second Sunday in July. During Sea Sunday, charities such as the Apostleship of the Sea, The Mission to Seafarers and the Sailors’ Society as well as non-denominational groups such as Sea Cadets conduct fundraisers, hold parades, and run awareness campaigns about life at sea.

Sea Sunday is recognised by many churches around the world who hold celebrations, services and collections to support the work of seafarers. In the Catholic Church, Sea Sunday is supported by the Apostleship of the Sea. A second collection is held during Catholic Sea Sunday Mass, with all funds raised going to the Apostleship of the Sea to support its work. It is a day of remembrance, prayer and celebration, and an opportunity to think about and thank those seafarers who work tirelessly throughout the year bringing us the 95% of good and services we often take for granted.