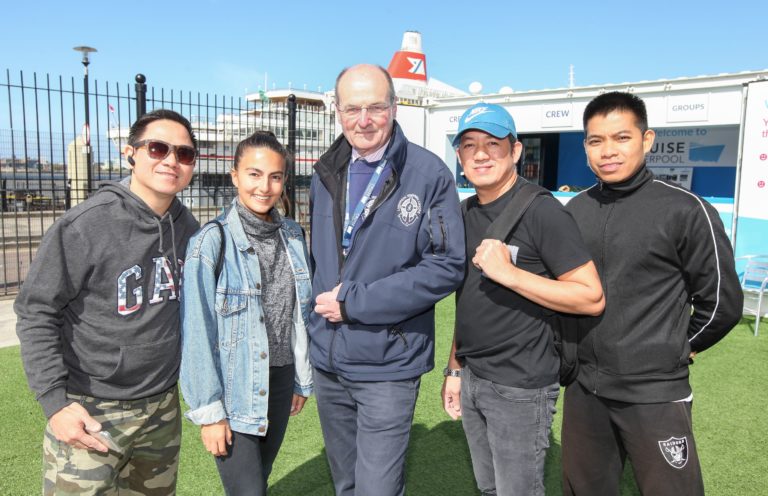 Maritime charity Liverpool Seafarers Centre (LSC) has struck a deal to provide support to thousands of cruise ship crew for the third successive year at a special base at Liverpool Cruise Terminal.

LSC CEO John Wilson said it has reached agreement with Liverpool City Council, and the cruise terminal, to operate a support centre from a converted shipping container. The container has been donated by the Maersk shipping line and is positioned on the terminal near Princes Parade.

Mr Wilson was speaking as he welcomed crew from the first cruise ship of the season to arrive in Liverpool, the Fred Olsen liner the MS Black Watch.  The cruise season runs from April to November and 58 ships are due in Liverpool this year each with between 120 and 1346 crew.

Mr Wilson said with most crew only permitted off ship for up to two hours it is vital to have an LSC base at the terminal itself to complement its headquarters in Crosby.

“Liverpool has a reputation for being one of the friendliest and most welcoming cities in the world to seafarers,” he said. “We are one of the few port cities to have a seafarer welfare centre in a cruise terminal. This makes all the difference to the crew, who would otherwise struggle to find the time to travel to outreach centres. Liverpool is leading the way in offering support to cruise ship crew. The seafarers are mostly from poor third world countries like Bangladesh, Indonesia, India and the Philippines. They are bread winners and spend their lives working away from their families just to send money home. With such a tough life it is vital they have a friendly person they can turn to, to offer confidential support, in case they have difficulties either on ship or at home.”

Mr Wilson said crew will be offered a range of services at LSC’s cruise terminal centre.

“While we offer a lot of practical help such as access to WIFI and money exchange we are also there for more serious matters,” he said. “This may relate to a health issue or a major life event for them or a family member such as a birth, marriage, divorce or bereavement. We can act as a go-between and can talk to the cruise line or ship management company if there are problems to ensure the seafarer is being properly cared for. Last year, for example, we provided extensive support to a crew member who needed urgent hospital treatment. We arranged for the treatment to happen and organised transport and overnight accommodation at our Crosby centre and we undertook the paperwork for their travel home.”

Mr Wilson said LSC relies on donations and is always on the look-out for volunteers to help at the centres making cups of tea, providing a friendly ear and driving the mini bus.