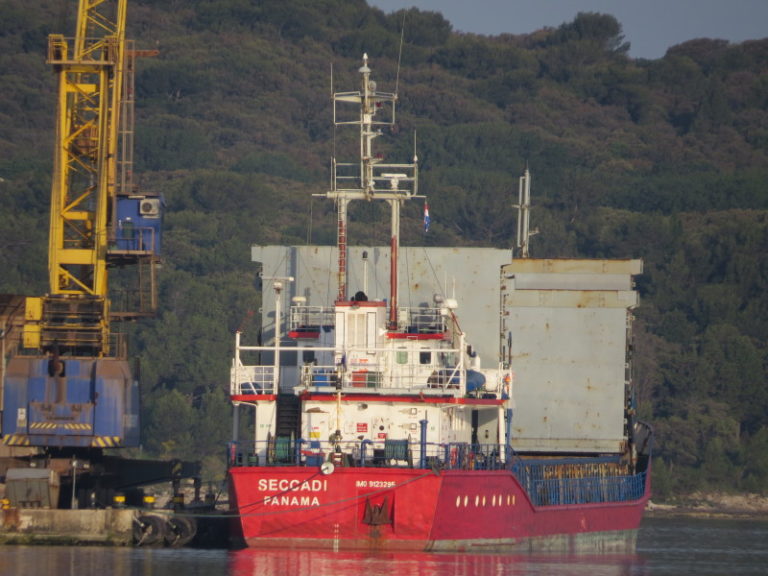 A group of nine international sailors who were left stranded on the Mersey for almost three weeks have now returned home safely following vital support from a new seafarers hub in Eastham.

The Panama registered cargo vessel Seccadi was detained by the Maritime & Coastguard Agency due to conditions on board.

It was given a layby berth at Manisty, Ellesmere Port, while crew remained locked in dispute with the vessel’s owner Voda Shipping of Turkey over pay and conditions. It is now understood that all crew have been repatriated at the owners expense.

The Hub, located at the Queen Elizabeth Second Dock in Eastham, run by Liverpool Seafarers Centre, initially made contact with the sailors after being alerted by International Transport Workers Federation (ITF) Inspector Tommy Molloy at the NW Port Welfare Committee about problems onboard the Seccadi. The Hub later notified HMRC’s Immigration Department at Liverpool John Lennon Airport.

LSC chief executive John Wilson said this crucially enabled the seafarers to secure a ‘Notice of Leave’ pass allowing shore time under controlled conditions to find a resolution. The charity arranged for the seafarers to be picked up from the ship and driven to its new £40,000 facility on the Wirral, allowing respite from the situation.

The case however continues after ITF lodged protests with the Turkish owners of the 1,596 gross tonnage ship Seccadi and the Panama ship registry over the conditions he discovered onboard the vessel.

Mr Wilson said it is the first time the new Wirral hub, which was launched just months ago in April, had been mobilised for sailor respite care. He said the charity operates a frontline service to provide practical and emotional support for seafarers, the often-invisible workforce that brings 95pc of all our trade to the UK.

“The seafarers have been repatriated at the owner’s expense, avoiding deportation which was fast becoming a reality,” he said. “They were berthed on the Mersey for just short of three weeks, where LSC visited them frequently and gave them the opportunity for a run ashore as required. Our new hub in Eastham provided a safe place where they could take stock of the situation on land,” he said. “The crew were multinational from places including Turkey, India and Azerbaijan and were able to take advantage of the free WIFI. This enables them to contact family, friends and loved ones back home for the first time in weeks and update them on their situation.

“This is exactly the kind of support that the Hub un Eastham was set up to provide. We worked fast in conjunction with HMRC and got them a week’s pass. This allowed them to come ashore and take respite in a private and safe place just miles away from their vessel. We will continue to work closely with the crew members as an intermediary to help resolve their specific situation and ensure they receive all the necessary guidance and advice involving multi-disciplinary agencies across the UK.”

Mr Wilson said the Guild of Benevolence has also made generous financial contribution to support the crew. They will continue to make use of the hub which works in partnership with its headquarters at Colonsay House in Crosby to provide support to the 50,000 seafarers who pass through Merseyside’s ports each year.

“LSC was set up in 1856 and its mission remains the same today to offer a life-line to seafarers around the world. The purpose of the new hub is to provide welfare support to those seafarers berthed on the Manchester Ship Canal side of the Mersey. The hub provides quicker access, solving the problem of the long trip from Eastham to Seaforth, the location of our other Waterloo base.

“As well as offering practical and emotional support we have a lounge, internet and gaming facilities and transport. We strongly believe in promoting the spiritual, moral and physical welfare of both serving and retired seafarers, as well as their families.”

The Centre first opened its doors in 1856 and the aims of the Centre today remain very much true to its origins. Situated in the heart of Liverpool docklands, Liverpool Seafarers Centre extends the hand of friendship to thousands of seafarers every year.

The Centre is inter-denominational combining the Apostleship of the Sea (Liverpool) and the Mersey Mission to Seafarers. At the centre, or aboard ship, Ship Welfare Visitors with support from our Honorary Chaplains, together with our active team of Volunteers are always ready to provide advice and assistance – irrespective of a person’s beliefs or nationality.